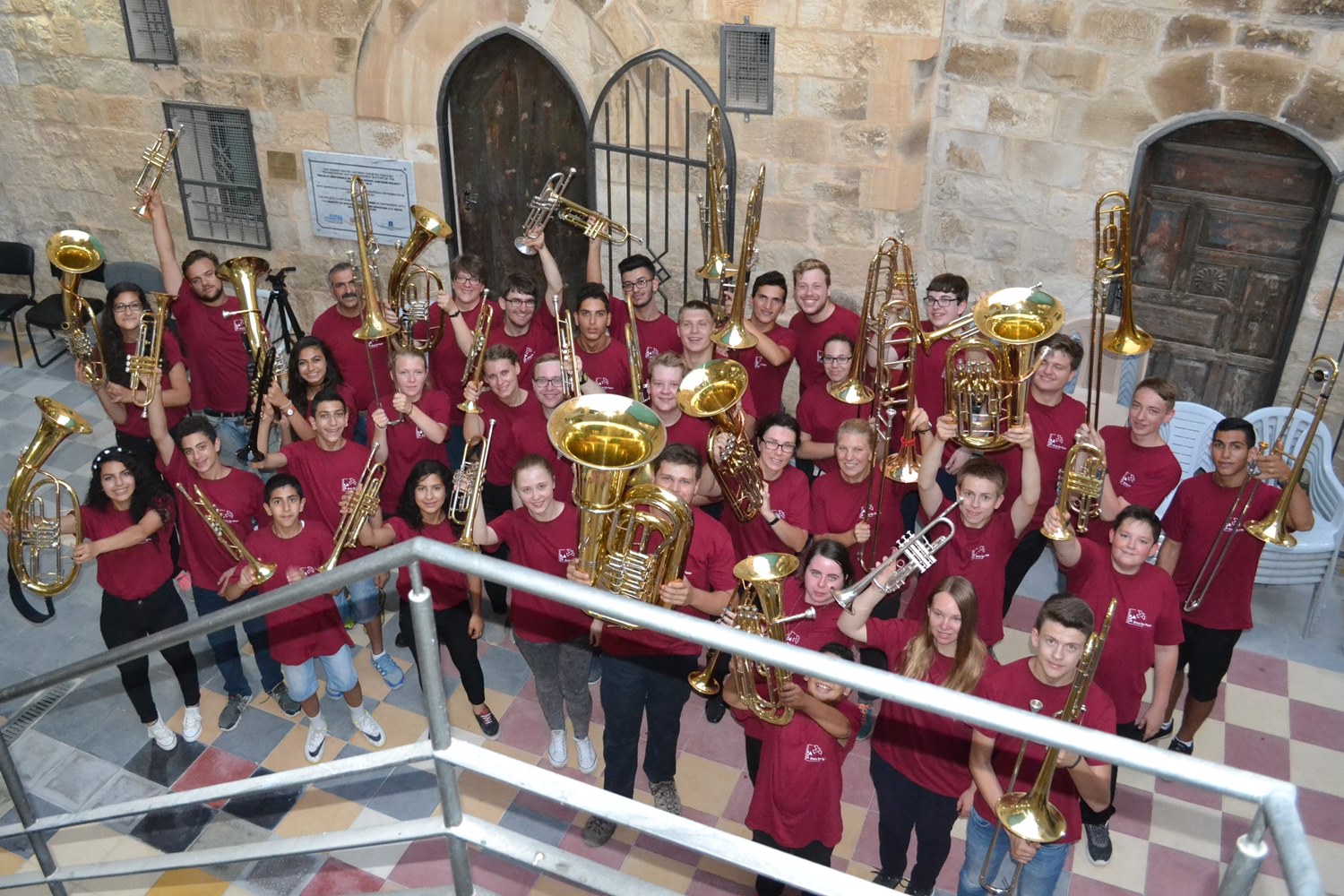 Finally, on July 23rd 2016 fifteen young participants boarded a plane towards the Holy Land, to meet the friends they met during Über die Mauer 2015. They brought along instruments, curiosity and lots of questions. 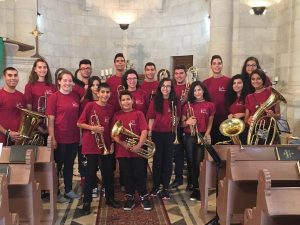 Starting in Bethlehem, all 30 participants travelled together to the north of the Westbank. There they were part of a brass music workshop. During the last week, the German participants stayed with the families of their Palestinian co-musicians. They experienced Arabic traditions and culture. Through participation in concerts and church services, they carried their sounds – the “Sounds of Freedom” – far into the country, across all borders and walls. We were all curious to hear what they would tell us when they came back … 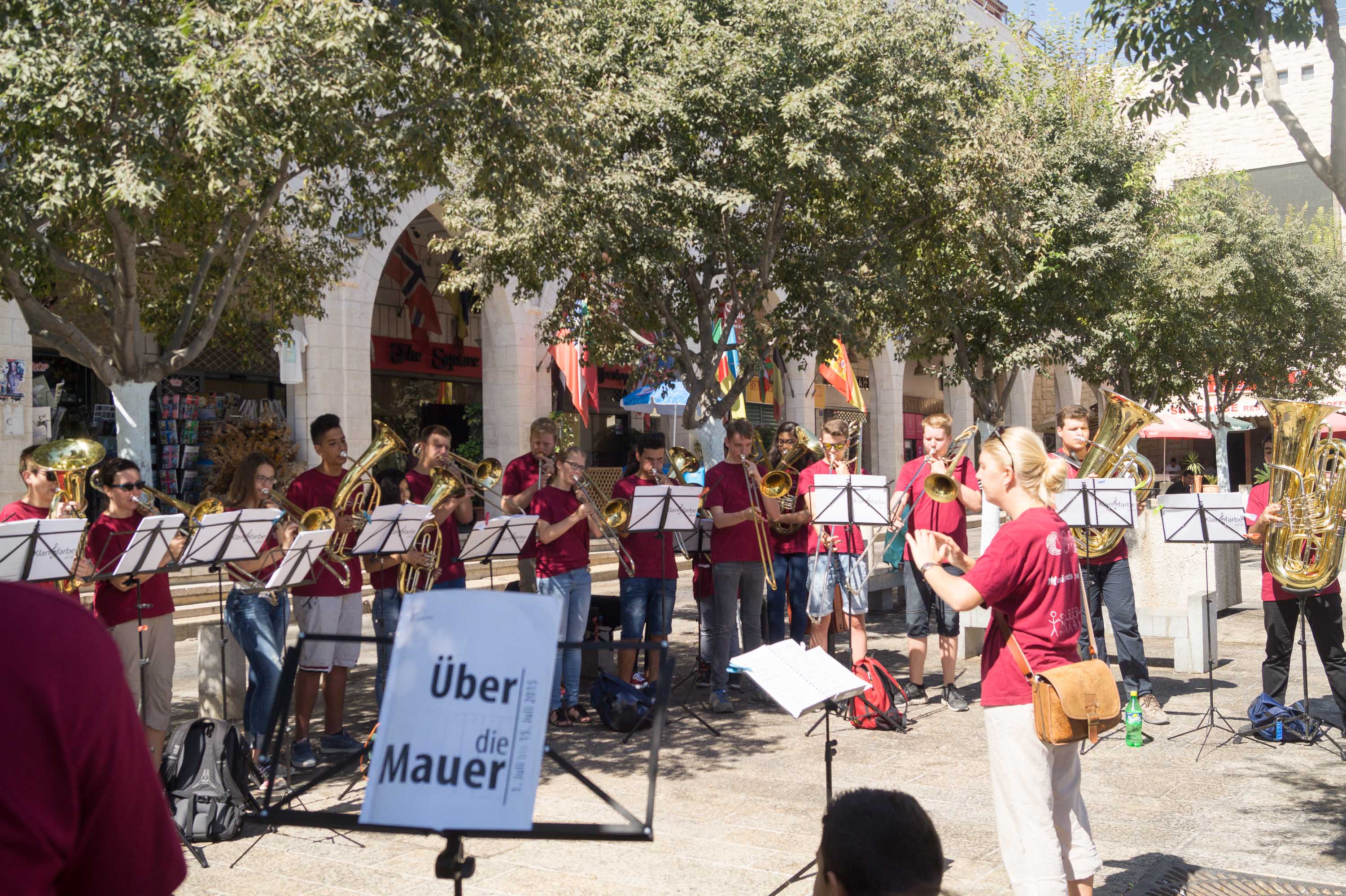 Monday, 25th – Saturday, 30th of July 2016
During this time, all participants lived together at the Kayed-Palace Hostel in Sebastiya, located in the north of the West Bank. During this time the concert programme was finished in a lot of rehearsals, games and intercultural activities brought variety to the days. Also, there was time for a few excursions into the surrounding region. The musical highlight was the concert on Friday night at the city center, which many people from the region attended.

Saturday, July 30th – Saturday, August 6th 2016
During the second week, the German participants stayed with the families of the Palestinian participants. Shared excursions (Jerusalem, Herodion, Mar Saba, Bethlehem) took place. During daily rehearsals, all participants grew together closer. Musical highlights were a concert at the Chrurch of the Redeemer in Jerusalem, concerts at Bethlehem University, in Beit Sahour and on Manger Square/Bethlehem as well as a concert at the Starstreet-Festival’s open air stage in Bethlehem.

All work for Über die Mauer is done voluntarily. Thanks a lot to all team-members!

… is second chairperson of Brass for Peace and professor for brass choir conducting and trombone at the Academy of Church Music in Herford. Monika was the principle of Über die Mauer. She also coordinated the logistics.

… was volunteer for Brass for Peace in Bethlehem, together with Moritz. They prepared the Palestinian participants, gave single, group and ensemble lessons, organized concerts, coordinated parent-teacher conferences, and much more.

… was volunteer for Brass for Peace in Bethlehem, together with Carolin. They prepared the Palestinian participants, gave single, group and ensemble lessons, organised concerts, coordinated parent-teacher conferences, and much more.

… studies sociology in Bielefeld and was Brass for Peace volunteer together with Fridtjof. With Monika, Stefan was coordinator for Über die Mauer. He was in charge of financing the project. During the project, he and Anna were in charge of the intercultural workshops.

… studied music in Hannover and was Brass for Peace volunteer together with Stefan. Fridtjof was musical director of Über die Mauer 2016. Together with Stefan, he prepared the German participants musically for the trip.

… was volunteer for Berlin Mission in the Evangelical Lutheran School in Beit Sahour. She organized the intercultural workshops with Stefan and helped with the documentation. Furthermore, during her year as volunteer in Beit Sahour, Anna played the trumpet in the Brass for Peace ensembles and taught some students, too.

… lives in Herford and supported Monika with the logistical coordination during the journey. Furthermore, she offered team building activities and initiated some games between the musical and intercultural slots of the programme.

… lives in Bethlehem and works as teacher at Dar-al-Kalima school Bethlehem. Hani is head of the Dar-al-Kalima scouts group and, like in the first year, applied his experiences in guiding youth groups.

… lives and works as a freelancing journalist in Hanover. The former Brass for Peace volunteer is lead social media coordinator of Brass for Peace and also responsible for the documentation and public relations of Über die Mauer.

… is chairman of Brass for Peace. He works as a pastor and commissioner for Islamic affairs in the church district o fLübbecke. Eberhard was in charge of the coordination of the logistics within Germany.

… lives in Germany, where he studied political sciences. The former Brass for Peace volunteer was co-initiator of Über die Mauer and head coordinator of the first Über die Mauer project. In 2016, he helped with his experience and through advice.

Even though many of the team members were already part of the first Über die Mauer Project in 2015, this year a few of them have different roles. The short descriptions just give you a hint at what each member´s contribution to the journey has been. Even though some team members were in Bethlehem, others in Germany during the preparation of the exchange, all of them worked together as one team to ensure the success of the project. 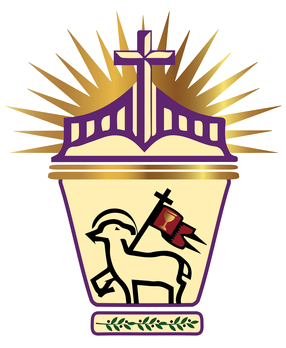