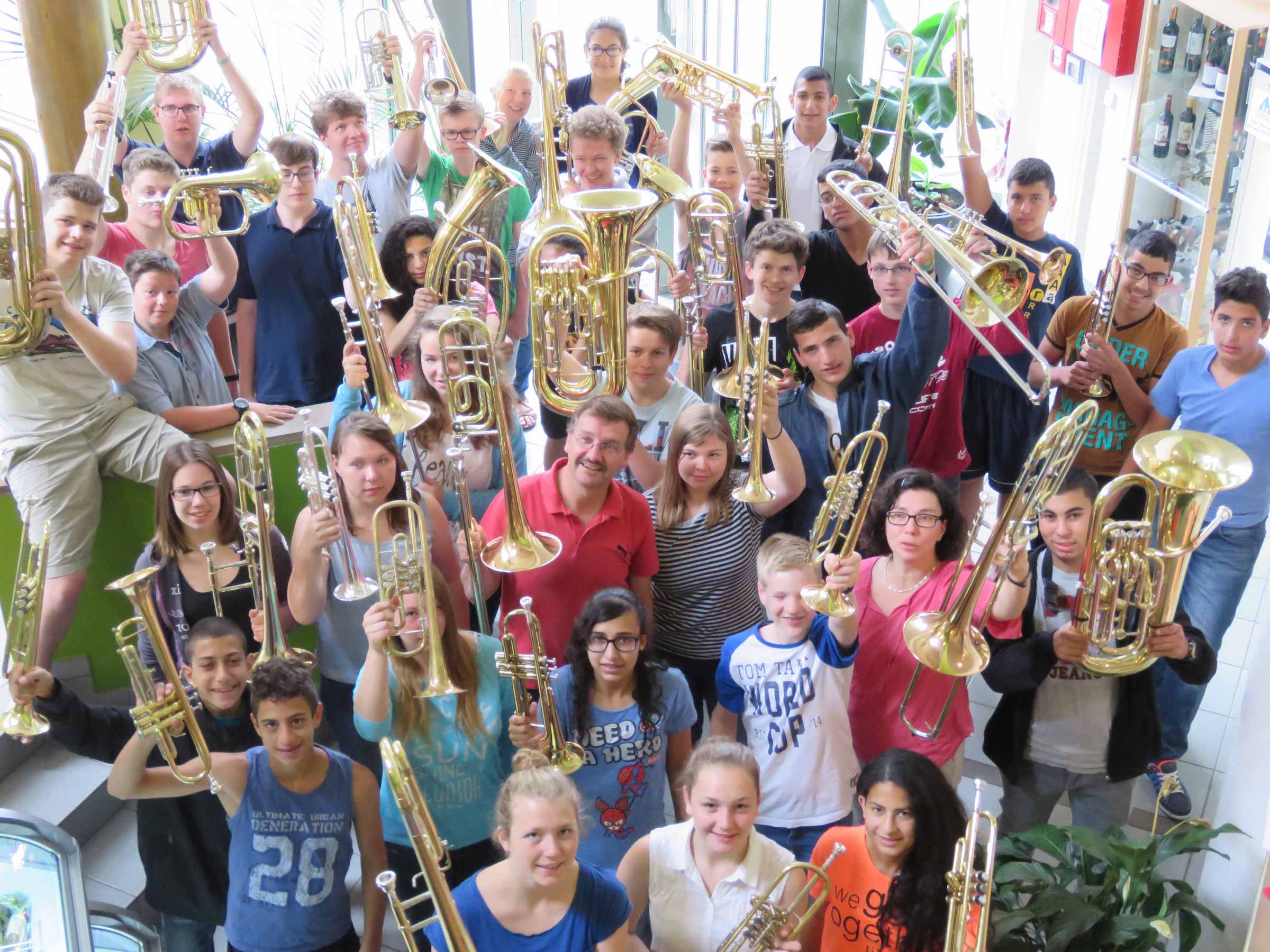 In July 2015, we invited 15 young brass players each from Bethlehem/Westbank and the Protestant church district Herford to a two-week meeting called Über die Mauer.

„Herford is looking forward to Über die Mauer 2015. In our church district, the encounter between adolescents from Palestine and our region is something very special. The co-operation with Brass for Peace will strengthen the work with young brass players in the church district and open new horizons. I hope that music will inspire many people in Herford and in other places all over Germany.“ (Michael Krause; Superintendent of church district Herford) 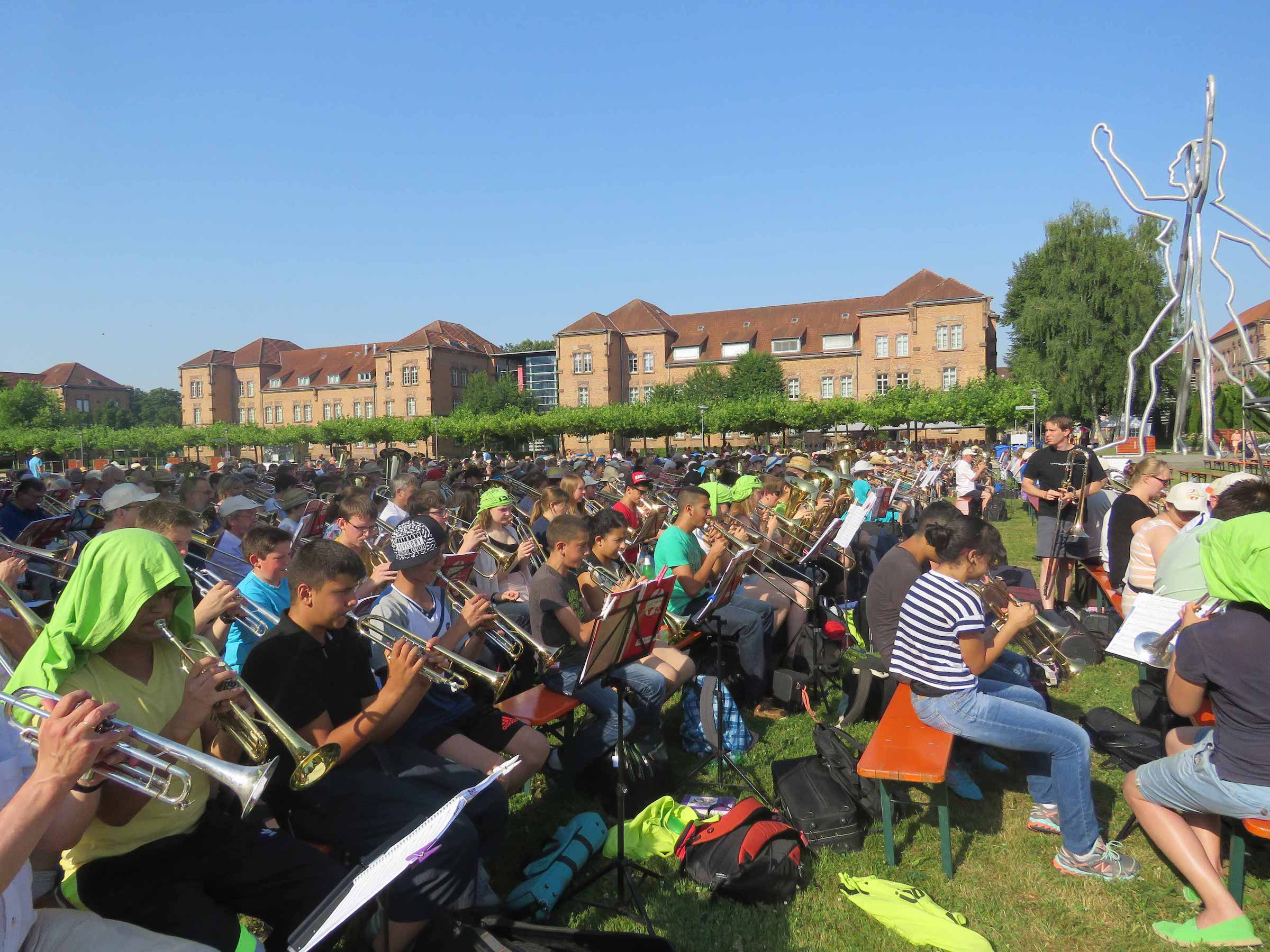 July 3rd – 5th: active participation in the Brass Days „Sound of Freedom“ by Baden Brass Association in Offenburg
During the Brass Days, the adolescents played music together with approximately 2000 brass players in one place for the first time in their lives and thereby experienced the full power and energy of the Brass Choir community. While listening to advanced ensembles, they had the chance to develop their own sound concept. Above all, the Palestinian adolescents independently emerged as authentic ambassadors for Christianity in the Holy Land and represented the Brass for Peace-project from Bethlehem in Offenburg. 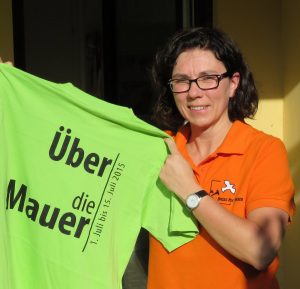 July 6th – 12th: brass holiday course at the Möhnesee/Westphalia together with Brass Association Westphalia
After a magnificent start into the meeting Über die Mauer at the Brass Days in Baden, the musical work was intensified in the bounds of a brass holiday course. Motivation and highly valuable impulses were given by experienced teachers and a musical programme for an independently designed final concert was worked out. During the stay at the Möhnesee, the work on musical abilities was as important as getting in touch with participants from the other country and thoroughly learning about their different backgrounds. With previously structured thematic units and diverse leisure activities, we achieved these aims and taught cultural diversity as enrichment. The combining element of music functioned supportively during challenging situations and reflections; it created attention for one another and established a personal relationship between the participants.

July 13th – 15th
Towards the end of Über die Mauer 2015, the intercultural exchange and the involvement in various living situations was intensified during the participants´ stay with families of young brass players from Herford. The participants were strengthened in their ambassador role when they experienced hospitality, connecting similarities and being accepted while sharing private living room. Further performances and an evaluation to save the learned contents summed up the programme during these last days.

In the context of Über die Mauer, the brass choir from Bethlehem, where lies the place of origin of Christianity, traveled to Westphalia, where the first brass choirs were founded. This is more than a nice-to-have and emphasizes the uniqueness of this special project.

… is second chairperson of Brass for Peace and professor for brass choir conducting and trombone at Herford Academy of Church Music. Monika was the artistic director and conductor of Über die Mauer 2015.

… is chairman of Brass for Peace. He works as a pastor and commissioner for Islamic affairs in the church district of Lübbecke. During Über die Mauer, Eberhard was responsible for intercultural work and took over various organizational and musical tasks.

… lives in Berlin, studies political sciences, and is ex-volunteer of Brass for Peace (2011/2012). He was responsible for concept, financing and public relations activities of Über die Mauer 2015.

… was volunteer for Brass for Peace in Bethlehem. Together with Fridtjof, he prepared the Palestinian participants by teaching regular brass lessons and extra rehearsals. Furthermore he and his colleague organized several parents meetings and served as permanent contact persons.

… was volunteer for Brass for Peace in Bethlehem. Together with Stefan, he prepared the Palestinian participants by teaching regular brass lessons and extra rehearsals. Furthermore he and his colleague organized several parents meetings and served as permanent contact persons.

… lives in Bethlehem and works as teacher at Dar-al-Kalima school Bethlehem. Hani is head of the Dar-al-Kalima scouts group and applies his experience in guiding youth groups as person in charge for Über die Mauer.

… comes from Beit Jala and has been supporting Brass for Peace in Palestine for many years. He is school commissioner for the Evangelical Lutheran Church in Jordan and the Holy Land (ELCJHL). Salameh is responsible for logistics of Über die Mauer in Palestine.

… has been Landesposaunenwart (= Chief Brass Choir Conductor) in Westphalia for many years. He supported Über die Mauer as a teacher during the holiday course at the Möhnsee.

… lives in Lübeck, where she studied to become a teacher in music and geography. She is a former Brass for Peace-volunteer and has been working as a pedagogic co-worker for the project since. During Über die Mauer, Wiebke was in action as musical assistant and leader of intercultural units.

… comes from Beit Sahour, works there as a nurse, and ensured that everyone stayed healthy during Über die Mauer.

… was about to begin her year as a volunteer for Brass for Peace and about to finish her studies of musical education with trombone as main instrument in Detmold. As musical assistant, Carolin had a chance to meet some of her future students during Über die Mauer.

… lives in Beit Sahour and worked as a teacher at the Evangelical-Lutheran school there. She has accompanied numerous student groups on their journeys abroad so far and has been supporting Über die Mauer as a caretaker since the rehearsal weekend in Al Auja.

… lived in Hannover, studied journalism there and was a volunteer for Brass for Peace in 2012/13. During Über die Mauer Felix was the main editor of the internet blog and documented the stay at the Offenburg Brass Days by camera. 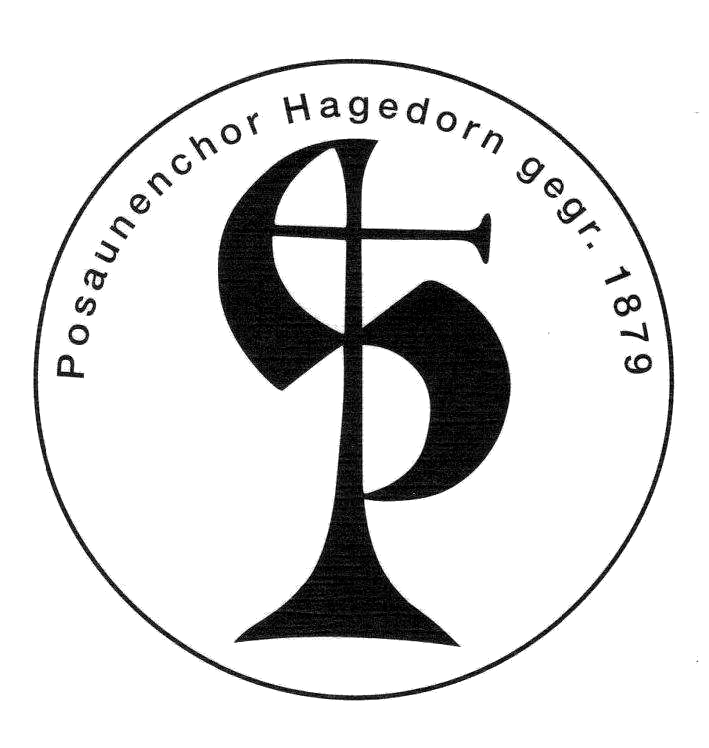